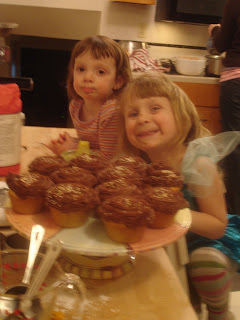 Here are the cupcakes we baked for dessert last night, vanilla cake with chocolate buttercream frosting. I wanted to eat them all but I refrained. Sadie said they were the greatest ever in the world, which usually means she likes something a whole bunch. I asked if she would want this for her birthday, suggesting we could make a vanilla cake and use the cocoa frosting, but she said no she wanted cupcakes. We have been to two birthdays recently which both had cupcake cakes. This is a cake made up of many cupcakes smeared with inches of frosting and an airbrushed picture. So I think the cupcakes are all the rage right about now.

Anonymous said…
It looks like there was some tasting to ensure quality before consumption after dinner. Tinker bell in striped tights, is definitely a sweetie.
ORANGE
March 08, 2007 7:07 PM