You have received a major award 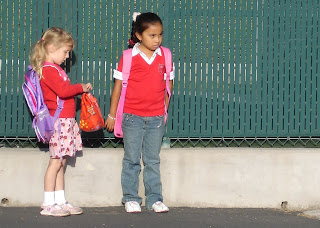 Sadie was recognised at school today. She was one of two students from her class to be recognised. Funny since she has missed half of the school year so far. Her award states, "Sadie is a great thinker. She participates in all the classroom discussions. She also works well with others. Great Job, Sadie!" Above Sadie is waiting with her classmate, Wendy, while the rest of the award winners line up. Tonight Sadie was reading the bumper sticker we were given to proclaim to the world that she has in fact received a major award, and typical to her "hurry and go" style of reading, she said,"My child is an award winner at cable electric school." Yes, we all laughed.

And then there is Emma... 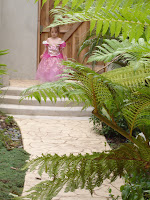 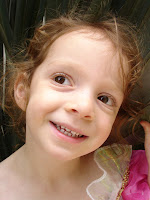 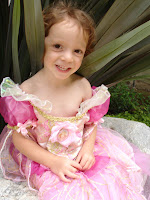 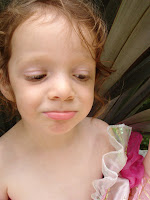 And she insisted on me taking a picture of many of her silly faces. In the center shot, she really wanted to have those leaves on either side of her face even though I really did not want them there. I also tried to pull up the top of her dress but that too was to stay where it was, according to her.
Lately, Emma has taken to singing around the house. I love it. She remembers little bits of songs and repeats them over and over in her sweet voice. Other times she makes something up to suit her mood or the task at hand. Tonight she helped me get the counter and mixer "shiney clean" after we made cookies. She used a hot pad and dusted around everything on the counter while I finished putting things together for dinner. And she sang a little hum while she worked.
Currently she has been singing, My Bonnie lies over the ocean, repeating "bring back, bring back, bring back my Bonnie to me."

Anonymous said…
Saturday night and the girls are supposed to be getting ready for bed. Emma comes out as if she is ready(in her birthday suit)and says: "Me no need pajamas, me not cold". Papa finds her pull-ups and pajamas and then it's time for books. Silly Emma.- Papa.
October 08, 2007 11:55 PM