Let's spread this out a bit next time!

One thing I love about Sadie is that she laughs when a kid is supposed to laugh. And she laughs hard with her mouth wide open, and her eyes get real big. You'd think this was just a normal thing for five-year-olds, not a care in the world, but that's not so true. (Note a Jersey friend at Sadie's No. 5 birthday, furrowing, frowning, lowering her voice and telling another kid that was receiving a temporary, kid-style tattoo, "You know if you get too many tattoos you'll have to go and join the circus.") But when something seems goofy and/or silly and/or contrived to adults, Sadie "gets it" like a kid should. She doesn't edit her glee. I love that.

Today was a big day..First drug store for some cold medicine for me, then to Fly's house for a coupon to the adidas outlet store, then to the adidas outlet store for some running shoes for the recently road warrioring parentals, then to Legoland California (which should really be called Legoland Non-Europe Edition, because there are no others outside Europe except this one), then to the Ocean Beach Christmas Parade, then to Rancho's, then bedtime.

First time to Legoland for us...big idea was to build a bridge to Disneyland. Sadie really (thinks) she wants to ride rides (and Emma wants to do everything that Sadie does). The rides at Sea World are few and too big, and many of the rides at Disneyland (if we ever get there) will be too big, but Legoland is a bulls eye for kids 2 to 7. A little bit of edu-tainment. I actually used to work for the company that did a lot of consumer research for Legoland Non-Europe Edition soon after it first opened, when visitors were few and the park was not making it pencil. The findings (you will be shocked)...Americans need less educational materials and more adrenalin pumping action in order to shell out $50+ per ticket. So...the nice folks from Denmark added a little more thrill (for kids 2 to 7, mostly, and me), and the place took off. 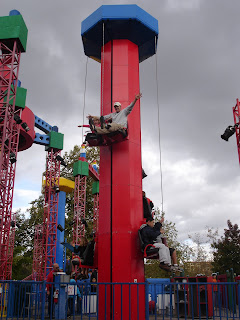 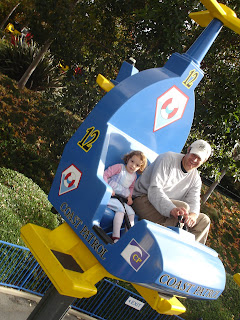 Emma and me on a "helicopter" -- (Sara took the photo from an adjacent chopper, which Sadie was flying) 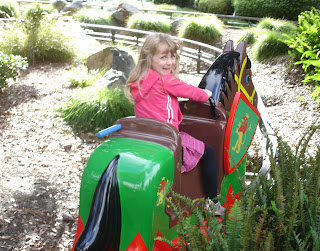 Sadie reacting quite appropriately to a very juvenile bit of slapstick.

After Legoland we had about an hour to drive to the Christmas Parade--perfect napping interval. We parked way up the hill and walked down to a prime spot along the parade route, right at the first block, so we would be the first to see the last float, and the first to bail and get a prime table at Rancho's (this is not stuff for rookies). Sara and I marveled at how local parades like these are really a slice of life -- all types are represented. Wonder what people do with their time in Ocean Beach, come watch the parade and you'll see a myriad of pursuits -- maybe a new option you might want to try. There were the roller derby ladies, the geriatric surfers, the standard firefighters and police-persons, the Hari Chrishna's, the mobile dog groomers, the mobile auto detailers, the hair dressers, the co-op grocers, the vintage VW drivers, the dance school, the football team, yada-yada...I forgot to bring my resume. 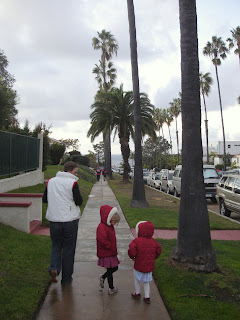 Sadie, Emma, Sara walk down the hill to the parade. The temp broke 60, so we all broke out our frost protection.


Hard to see here, but whimsy was abundant at the parade... 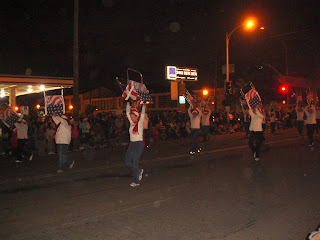 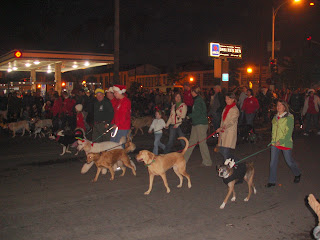 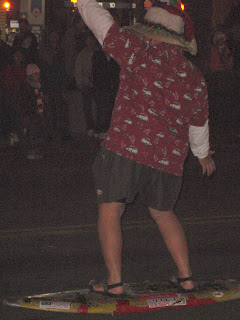 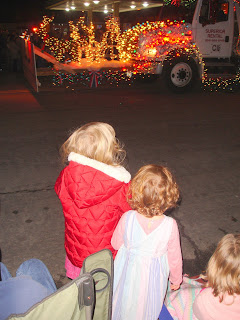 Anonymous said…
Before the Christmas Parade, Ocean Beach was the home of "Days of Fun" which began with a parade and ended with a carnival in the Newport St. parking lot; rides, games,etc. As a kid I marched in several of the parades most as a Hula dancer with a grass skirt that refused to stay on...just another adventure in the life of Grammy, native Obeachian
December 04, 2007 1:39 PM