By 1000hats - April 10, 2008
Sadie and Emma have developed a fondness for snails lately. It is ever so exciting when another one crosses their path or they turn something over and there is a little brown turned shell. For whatever reason, we don't have many at our house, probably has something to do with the dozen or so bags of pesticide, fertilizer or other toxic substance which was left in the garage by the previous owner. I tend to send them flying over the fence or ignore them rather than throw poison at them.
Actually as kids, we had ducks that would eat them as well as a cat who thought they were a treat. When it rained, we had been known to collect them in a big bucket and dump them in the street to watch the cars run them over. Yes, this was a bit cruel but they at least had a chance to get away to other neighborhood gardens and there were not too many cars that came down the street back then. 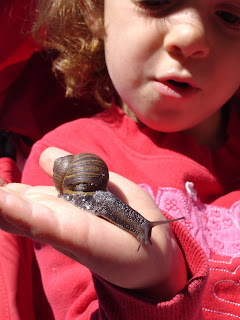 Anonymous said…
Gee, I hope those snails Emma took from my yard will get along well with the snails in your yard. Nothing is worse than Snail Wars...