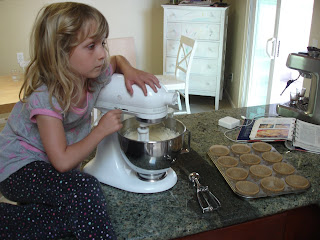 Perched on the counter, Sadie is watching the clock so she can shut off the mixer at exactly the right time, I think there was about three minutes of mixing involved. We made cupcakes to celebrate Neela's birthday last Thursday when she was over for the afternoon.
Sadie was very excited about Neela turning four, in fact she may have been more excited than Neela. Neela kept insisting that she was not four yet, she was still three for another day. Guess she has had the time of her life being three!