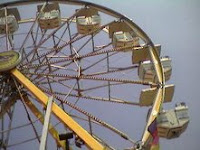 Us girls headed up to the fair on a late Wednesday morning to catch the sights, sounds and, well, smells of this year's county fair. I think that really it never changes, the fair. There are new prizes, new names for rides that seem to spin and make you just as sick as the year before, booths selling the same stuff (kitchen knives that slice tomatoes like butter, pans that never burn, miracle mops, no streak chamois) with new packaging, and all those 4H kids hoping their beast will win a prize. But the kids like the fair! 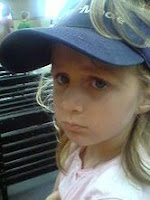 We came into the fair near the barns so we walked through a sheep and goat barn, then another which also housed some steers. And finally we made it to a children's barn with a petting/feeding pen and a mini grocery store, complete with mini carts where Sadie and Emma shopped for items with ingredients including chicken, cow, tomato and corn. 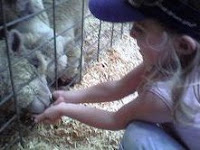 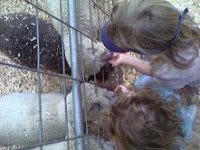 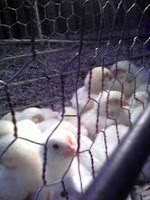 Next item on our agenda was to find some lunch and when I go to the fair I play the safe food card. I looked for the girls in the funny red, blue and yellow hats handing out freshly battered and fried hot dogs on a stick and when we found those girls we had ourselves some lunch. 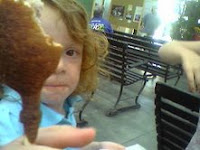 Sadie was very excited to ride the Ferris wheel and once she had a taste of ride glee, she could not find a ride she did not want to try. 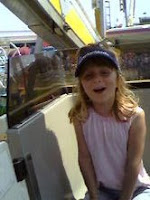 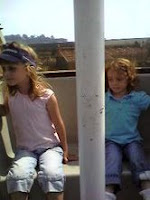 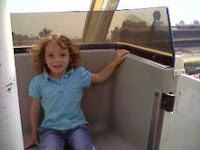 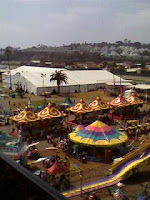 We started with the Ferris wheel and next was the pint-sized roller coaster. Sadie rode this alone since Emma was too small to ride. And the first thing she said when she came down the stairs was, "Can I do it again, Mama?! That was sooooo fun." And when I said yes, she was beside herself with ride fever, grabbed the tickets and cut in line without anyone noticing and was back on it in minutes. 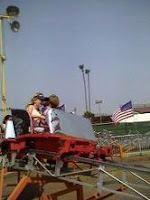 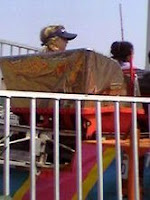 The first ride, Sadie was in the front car. The second ride Sadie rode the last car. 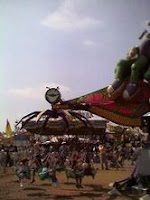 A traditional fair swing with a twist. You all know the fair swing with all of the chairs hanging that turns and raises into the air. Well, this was a mini size one with an extra spin involved. There were several swing sets that revolved separately from the main wheel which also turned. Well, if the description is making you a bit queasy or confused this was exactly Emma's reaction to the ride. She looked terrified and to top it off she got in the bunch of swings with all the older, rowdy kids Sadie's age to about 9. 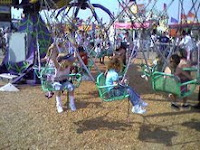 Poor thing, she was brave, like always, but she did not like it one bit. So then we went to see if she could go on the merry-go-round, but of course she was too small by a half inch. I consoled her crying while looking round for another ride that might look fun and simple for her to enjoy. Aha, the balloon ride. The ride was basically the tea cup ride from Disneyland but the balloons went up and down and around and around. It seemed mellow as long as they did not turn the balloon. Emma and Sadie climbed aboard but Emma looked a bit worried. Soon they began to turn and rise. Emma was really not happy and her custom bravery was showing some cracks. I instructed Sadie not to turn the wheel so the balloon would just float around but the momentum of the turning was making it spin. Poor Emma's bravery was now in a splintery pile around her feet and tears began to drip down her cheeks. Luckily rides don't last too long and soon the balloon was floating back down and the revolutions were coming to an end. Emma was freed from her balloon and I hugged her and asked her if she was ok. Her tummy hurt and she was scared. Of course, Sadie was planning her next ride, but we were done in fun land. Time to walk of the wooziness and find the garden display before we headed home.

As promised we stopped for an ice cream treat after the rides. Sadie picked a root beer float and Emma and I each ordered a frosty cone with sprinkles. We sat and enjoyed our treats while they dripped down our arms and into our laps. Sadie laughed out loud at the dancing roasted chicken bodies that danced across a big screen over a food booth. 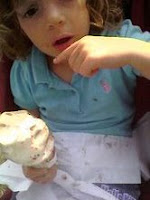 We stopped to listen to some local musician, by Sadie and Emma's request before heading back down to home. 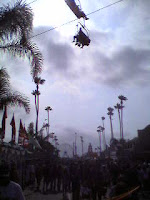 All photos taken on my phone camera, I forgot the real thing!