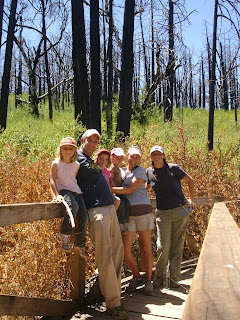 This Sunday we went camping. After a bit of discussion and one trial run in the backyard, we came to the agreement that one night was enough to have fun and not get burnt out all in one trip.
Nicole and Neela arrived before us and scoped out the campsites and signed us up for a great spot; close to the bathrooms but not too close, without many neighbors and some trees. We met up at the gate and drove back to our spot.
Upon arrival, we hopped out and started gabbing away. Then I looked out to the right of the car and guess what is heading our way without any intention of going around; a rattlesnake. I suggested we get in the cars, Nicole wanted to have photo documentation of our first encounter with nature. I pulled the car back to remove us from its path and the snake continued its progress across our driveway, heading right at Nicole's Jeep. As she got out the camera and took a couple steps toward the snake, it decided it did not want to be around and increased it's speed four-fold with its rattle twitching. The snake scooted across the driveway and down the hill into some leaf litter where it relaxed and continued in that direction, on its merry way.
With the snake out of our site, we ate some lunch and prepared our camp site for living.

With tent up and kids getting dirtier by the minute, we decided to take a hike. The 1.4 mile loop trail looked good, not too long for little legs but out away from the camp ground. We passed a couple markers thinking we were on the loop path and were taking in the beauty around us. The most striking were the burned pines and oaks against the brilliant blue sky underlined with fields of green manzanita. After awhile we thought it seemed that our loop should have been turning back on itself any turn now, but alas we had headed onto a longer trail and there was no loop in sight. We were in for the long haul.

Nathan, Sadie and Emma had ran ahead of Nicole, Neela and I hoping to be the first ones back to camp. We kept trudging up the rocky path toward the top of the mountain and at every turn I thought maybe we were coming to the top and would be heading down again. Finally we reached the crest with an awesome view of the Cuymacha Lake below and I heard Sadie yelling for me. I called back. When we met up once again, Nathan had thought we had followed the right path while he had led the girls on the wrong on and we were miles apart. He had stopped a couple times and they had been resting for about 15 minutes when we finally met up with them. So we all headed down the path together and made it safely back to camp. All of us big people were amazed at the fortitude of the little ones to hike all that way, 3.6 miles. There was some piggie back rides to keep them going.

That night we made dinner, hamburgers and corn, and then the moment everyone was waiting for had finally arrived. SMORES!! And they were quite delicious.

Other details, we froze all night and most of the adults probably had three hours sleep if that. So by morning we were ready for coffee, a warm fire, breakfast and pack up. We headed out by about 11:30am and picnicked for lunch. Nathan went home while us girls headed up to Julian for a slice of pie and ice cream. Then we headed home too. The trip was a good test run for next time. After twelve hours rest, I can actually think about doing it again!

Anonymous said…
Whew!!!
I am exhausted just readng about your snake, hiking and camping adventure!!!!
I guess the pioneer genes skipped a generation!
August 12, 2008 10:52 PM

Anonymous said…
Sounds like a great new adventure, with a dose fo realism up front.
At what park did y'all camp?
I like your beachy intro photo!!
Papa
August 13, 2008 8:26 AM