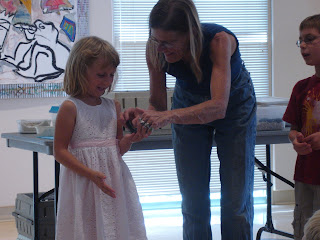 The library activities for this summer are all bug themed. Last week there was a bug band, including a ladybug, a bee and a caterpillar which metamorphosed into a butterfly! This week was a woman who rescues animals in the creepy crawly category. All of her show and tell creatures were rescued which makes me wonder why anyone would want a hissing cockroach or the world's largest millipede. She had two millipedes and Sadie got to pet one, which according to the woman, feels like a tootsie roll. Sadie was also privilege to wearing the millipede as a belt! Did you know the average millipede has between three hundred and four hundred legs? 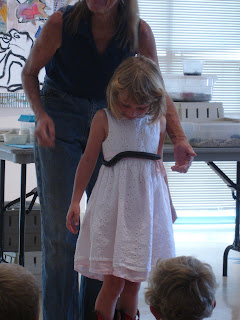 When the host asked Sadie if she would be willing to let the bug crawl on her, she stood there looking at the thing for a good three seconds and then nodded yes. Nathan blames me for her fear of spiders. If she sees one of significant size she gets the shivers, it cracks me up. But with other bugs she is super curious. She loves to hold crickets, caterpillars, worms and beetles.
Emma watched and afterward pet the snake, lizard and millipede that were open for petting. She asked if she could hold a bug so I told her to raise her hand but she did not volunteer for the scorpion or tarantula. Sadie was really upset that she did not get picked to hold all of the bugs and creatures. We all learned a lot about bugs and snakes like the biggest bug in the world is a giant squid (the size of two school buses) and the largest fossil found of a cockroach was thirty seven feet long and it lived in the ocean. The smartest bug in the world is an octopus.

Scythemantis said…
lol no, the largest cockroach was only one foot in length....the largest arthropod ever known was six feet :)
(that's "Arthropleura")
December 15, 2008 9:41 PM