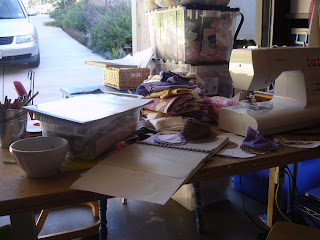 My newest crafting space with some projects in the works 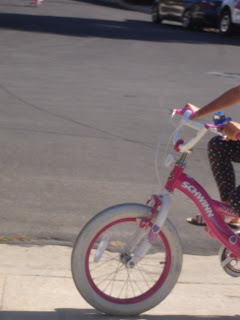 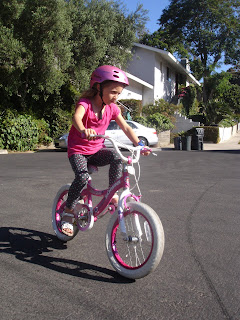 No training wheels! She decided once and for all that she needed to try riding with them off. (Inspiration: Her friend, Hannah, just learned to ride without training wheels. The kid is competitive.) So off came the extra wheels and in about three minutes she was touring the cul-de-sac with out a hitch.   Nathan did have to suggest that she ride the other way around the circle so she learned to turn/balance both ways. 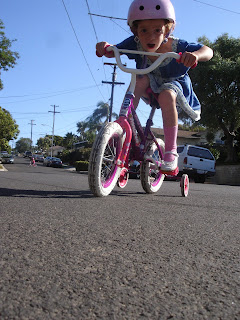 Won't be long until this one wants her wheels off as well. 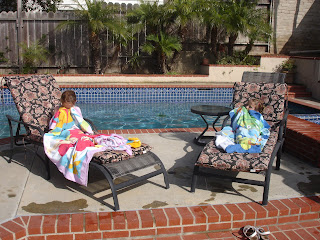 Swimming at Martha and Jack's house. The pool temp has gone up a bit but it still makes them shiver after about 30 minutes.  So we warm up with towels and the sun. Snacks help too. 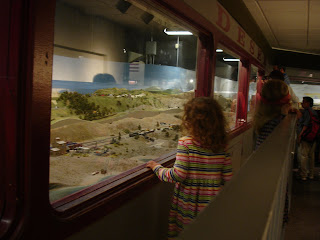 Tuesday is our day at Balboa Park because a selection of museums are free then.  We went to the Miniature Railroad Museum, which provided to be a hit even though when I was describing it to them Sadie rolled her eyes.  But it is soooo crowded that we did not go to the Science Center as planned. Instead we stopped for an ice cream cone and then walked back to the car parked a mile away.  Between everyone coming into town on vacation and everyone staying home for the summer, I think the summer tourist industry here should be doing well!

Anonymous said…
Yeah, Mama. Yeah, Sadie and Emma. Mama can't ride, so Daddy you're going to have to get with the bike skills to keep up with the girls. Aloha,Papa
July 15, 2009 1:33 PM

Alisha said…
People often ask me when the best time to go to San Diego is, and I tell them, "NOT summer." It's too cool at the beach and the fun stuff is crowded! September and October are nice. :o)