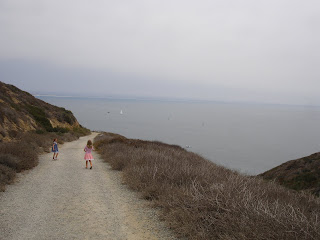 We packed up a picnic and headed due south, out onto the point, for a bit of adventure today. We stopped at a bench over looking the Pacific, had a bit of lunch then headed over to see the lighthouse and down the Bayside Trail(above).
On our way out to the lighthouse, Emma spied a statue claiming that it was the Liberty statue.
Well, said I, actually that is a statue of Cabrillo.  Sadie thought I was mistaken and that the statue was actually of Columbus.  I tried to explain why it was Cabrillo rather than Columbus with some very rusty strands of history that I could quickly access floating around in my head,
and said I think it all ended with Sadie saying, "I know."
Every seven year old is a know-it-all. 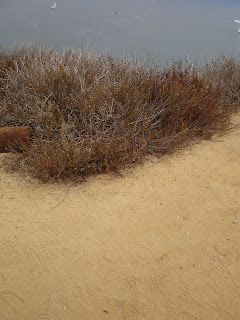 It is late summer here, which means it has not rained any of the ten inches the point receives each year, since probably March.  Everything is quite dry but amazing enough, some scrub was flowering thanks to the damp sea breezes. 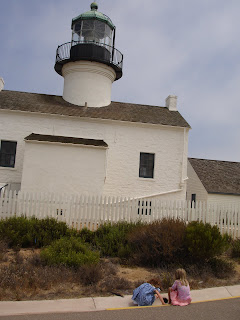 Emma checking out the drain to see if there was anything in there.  The girls were very excited to climb up the tight spiral staircase and the ladder just below the lamp.  I only went up one flight.

Unknown said…
It's the heavy sigh then the "I know" said by one who has such a large burden living with us less knowledgeable folks! It cracks me up (but then, I don't get to live with it!). That's why you want to enjoy them when they are small and you are still smart!
August 11, 2009 7:29 AM

Anonymous said…
Does that trail lead down to the tidepools? I don't think I've ever been down there. Sounds like a nice hike for anyone but a "great-with-child" daughter. Have to do a picnic walk with the girls sometime soon. Papa
August 11, 2009 8:06 AM