A visit with the dinosaurs 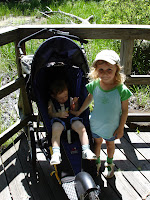 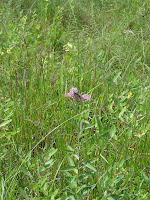 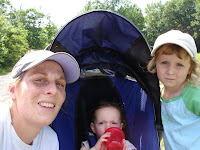 Yesterday we went on an adventure. We headed out to the Great Swamp Refuge, us three girls. After winding through country roads we came across the headquarters for the park and pulled in to get started on our adventure into prehistoric New Jersey. Of course, when I thought of this "brilliant" idea I did not put much thought into it other than we could walk on some trails and see some nature. Well, if you think of swamp what comes to mind, maybe alligators or big mossy trees, but maybe like me the idea that the place would be overrun with mosquitoes did not enter your mind. So we embarked on our journey into the Great Swamp and about thirty paces in the little buggers start ATTACKING! I was not willing to retreat back to the car, but visions of West Nile Virus were haunting me as we walked very quickly along the boardwalk trail above the swampy muck. As long as we were moving, they seemed to stay off of me. Every time we did stop, a million of them hopped on for lunch.

The swamp was really quite beautiful. We have had many rain storms this summer so there was an extraordinary assortment of brightly colored mushrooms growing all around. We saw yellow, orange, school bus yellow, and red mushrooms as well as many others in assorted colors of brown. We wound through the trees on a boardwalk built just above the water and found a little clearing were the water was more of a pond depth. Here was where we witnessed the prehistoric world come to life. There were dozens of dragonflies of all colors but the most amazing part was their size. The bodies were six to eight inches long with wings of equal length. Some of them were so large they looked like birds flying and feasting on all the mosquitoes that were feasting on us as we stopped to watch them buzz around the pond. After swatting two mosquitoes off of me and shoeing one off Emma's nose, we hurried on our way along the raised trail until we found the look out blind set up to watch birds. Sadie and I ran in and looked, but I did not see much, so we ran back out past the wasps that were busy doing waspy things around the door into the blind. We were on our way back to the car now much to Sadie's dismay.
Once we reached the car, we took a little walk around the "meadow" in between the entrance and exit to watch the huge orange butterflies flitting about.

This photo of Emma and I was taken by Sadie. 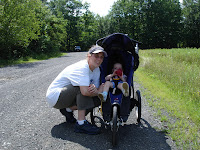 Alisha said…
Um, OK, dragonflies are nice and all, but I think I might get a little aprehensive about ones that are THAT big!! I'd love to see them...but from a distance. :o) It sounds like a cool place...a nice summer time diversion. We haven't spent any significant time outside in about 2 weeks (other than vacation) because we are having record-breaking heat and I don't want to kill my kids!
July 26, 2006 11:25 AM

Anonymous said…
Emma kind of looks like she's calling Sadie a loser with that hand signal. Maybe she wanted to take the picture.
Orange
July 28, 2006 9:48 PM