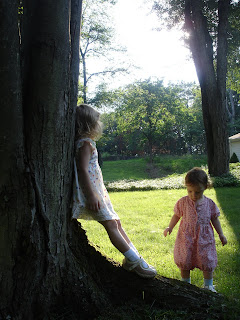 Our summer has gone fast and the beginning of school and fall is just around the corner. We have had a couple play dates at the park with friends from school lately which results in a couple of really tired kids making bedtime a much easier endeavor.
The weather has been nice lately with blue skies and a little rain. Not too hot, too humid and cool breezes at night coming through the windows rather than the vents!

Emma's vocabulary is blooming with the addition of new "words" everyday. Pizza, diaper, pig, baby, hat, cow, kitty, more, done, no, mine,apple,. These are the newest and most common. She also has been laughing at everything, especially if you name the thing she is pointing at. She points to her diaper when she is ready for a new one and walks up stairs when you agree to change it.

(A week or so later)Fall is coming quickly. We have had four days of rain and now it is windy and cloudy. We really would like to see the sun again. In the garden, we have picked three strawberries from our little bush. They are the first of the summer thanks to the squirrels who have been stealing them the whole time right as they are about to turn red. I built a steel cage from hardware cloth with a roof to keep them out and it seems to do the trick. The bush looks promising with many more flowers and little green strawberries waiting to ripen. The yellow squash is making many squashes but since I am pretty much the only one who eats them I think we will leave them off the list of "to be planted" for next year. We also have a voluteer pumpkin that is about the size of a lime and the same color too which I hope with reach small pumpkin size by October. It had a late start so I am hoping for the best. Also our sunflowers, cosmos and morning glories have finally flowered and it is so nice have some color in the back.

Sadie will be starting a tumbling/ballet class in September when school is back in session. We went by school to drop of some paper work and saw the newly arrived fire engine on the playground. Sadie was quite excited and had to figure out all of the tricks before we could play a short game of baseball on the field behind the school.

I can't believe it but I am wishing for some hot weather again before we descend into fall and winter. I am sure there is some on the horizon...I hope!!