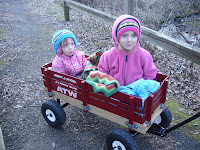 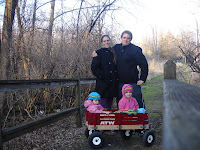 This morning we had some snow outside to ooo and ahhh over. After breakfast we went out to play in it before it melted away. There was enough to make snowballs, snow angels and tracks. We used up the snow on the driveway and headed across the road to the sidewalk where the shade provided ample amounts for more snowballs, angels and tracks. Then we loaded the wagon up for a walk down to the bridge to see if there was ice over the stream. The temps have not been too cold so there was not any to be found until we headed over to the the river. Sadie made a snowball and carried it on our walk, talking about how she was going to put it in the refrigerator so it would last ten years. I made a ball for Emma to carry as well and when we reached the river she decided she wanted to throw it into the river. After one attempt and a miss, she thought it would be better for me to throw it in. After, we watched it float down stream and slowly melt away. It was a nice walk, the snow lifting everyone spirits enough to avoid all the usual whininess the accompanies us most of the time. It has been a lovely day so far, without of all the usual "to and fro"-ing.

nate said…
You forgot to mention that I skidded out of control and backed into a tree on my way down the driveway this morning! No squirrels were harmed.
January 19, 2007 11:35 AM

Papa said…
Yeah! They store them away for the winter, just for eventualities like those described!
January 22, 2007 8:43 AM